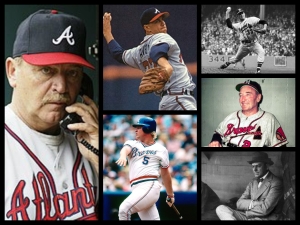 Friday night marked the annual induction ceremony for the Atlanta Braves Hall of Fame as part of the team’s ChopFest Gala.

Terry Pendleton was among the two inductees, alongside 19th-century star Hugh Duffy.

“T.P.” played five seasons for the Braves and was a key member of the National League championship teams of 1991 and 1992, winning a batting title and NL MVP in 1991 after signing with the team the previous offseason.

Pendleton was a clubhouse leader and teammates credited him with helping to change the team culture as the team was transformed from their 1980’s mediocrity into the perennial winners of the 1990s. Chipper Jones credits the mentoring of Pendleton for helping him learn how to handle himself as a major leaguer. His leadership has continued after his playing career, both in coaching and front-office roles.

Pendleton’s induction has been long overdue, and begs the question what other former Braves are worthy of induction next year and beyond.

Here are a few people who should be in the Braves Hall of Fame:

Simply put, Leo Mazzone is one of the greatest pitching coaches of all-time.

In a statistical analysis, author J.C. Bradbury found that pitchers had a better ERA under Mazzone by 0.64 points than under other pitching coaches, and that pitchers’ ERAs went up by 0.78 points in the season after leaving Mazzone.

It’s a no-brainer that Mazzone should be in the Braves Hall of Fame — and he has a case for consideration to the National Baseball Hall of Fame in Cooperstown.

As important as the “Big Three” of Maddux, Glavine and Smoltz were to the Braves successes of the 1990s, Steve Avery played just as big a role.

Injuries derailed the back half of the southpaw’s career, or else he might have matched or come close to the career numbers posted by the “Big Three.”

Horner played both corner-infield positions for the Braves from 1978-86 and was a key member of the 1982 NL West Division championship team.

The Braves drafted Horner out of Arizona State in 1978 and he became a rare player to debut professionally in the major leagues without playing a game in the minors. In that debut, he homered off Hall of Fame pitcher Burt Blyleven. He won Rookie of the Year after hitting 23 homers in 89 games.

Horner also became one of 18 players in MLB history (and one of three Braves) to hit four homers in one game, doing it on July 6, 1986.

Fred Haney and George Stallings are each worthy of induction to the Braves Hall of Fame after each guided the franchise to one of its three World Series championships.

Despite unsuccessful managerial stints with the St. Louis Browns and Pittsburgh Pirates, Haney took over the Braves managerial job midway through the 1956 season after the firing of Charlie Grimm and led them to a 68-40 record the rest of the way.

Haney, with a 341-231 record, has the second-best managerial winning percentage (.596) in franchise history (min. two seasons).

Stallings managed the “Miracle Braves” in 1914, leading them to the World Series title. The team started 4-18 and was 26-40 on July 4 before going 66-19 the rest of the way to win the pennant and sweeping the Philadelphia Athletics in the World Series.

Stallings, a Georgia native, managed the Boston Braves from 1913 to 1920, and while the 1914 championship team was his only playoff appearance with the club, he also led the team to solid records in 1915-16 (and it was much harder then to make the postseason).

Stallings’ 579 wins are the third most by a manager in franchise history.

One thought on “Fast Five: People who should be in the Braves Hall of Fame”